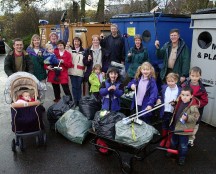 From the Group’s first ever event, a litter pick in November 2002, to the present we have collected literally hundreds of sacks of rubbish (shameful but true), trying to recycle as much as possible. More unusual items found have included a television, lawnmower, pushchair, two deckchairs, a doll and a tent! We are always grateful to Bracknell Forest Council for disposing of the rubbish we collect. Each year one of WEG’s litter picks contributes to The Big Tidy Up’s nationwide targets (see here for more information).

As well as arranging our own quarterly litter picks WEG is happy to help other organisations with theirs, especially where young people are involved. We run an annual litter pick for pupils and staff from Meadowbrook Montessori School, and we have also run numerous litter picks for the 2nd Bracknell Beavers and 1st Warfield Beavers. WEG can also loan litter pickers and trolleys to groups who may wish to run their own litter picks – the Eco Group at Sandy Lane Primary School have done this.

Finally, do you need to report a street cleansing problem such as dumped rubbish, a dead animal, or an abandoned shopping trolley? You can report it to Bracknell Forest Council either online, by phone or by email – details here.